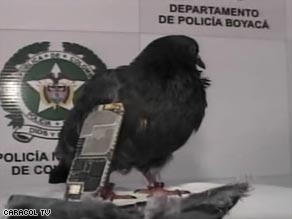 A carrier pigeon in Colombia gave new meaning to the term “jailbird” when officials discovered that it was trying to smuggle cell phone parts into a high-security prison, a news report said.

The carrier pigeon has Colombian authorities concerned there may be a new way to smuggle goods into prisons.

The bird was carrying the contraband on its back in a little suitcase, the Caracol news outlet said Monday.
source: CNN.com

Let no one say that criminals are not innovative and creative people; they obviously just have a hard time channeling their skills to non-criminal acts. Hustlers will always find a new, innovative way to do something better, faster, more effecient, or in this case – without detection from ‘the man’.

Yes, I am Still Sane

Minds really do travel at light speeds at times; as thoughts of innovation and creation flood the mind. I haven’t been here in a minute as I have been juggling conflicting stressors – some stressors are not welcomed, others are, as they challenge me to find creative ways to cope and handle them. I have been trying to organize my thoughts and all the ideas that I want to do for the last month, I think I am like 80% complete – for as we know with all projects, the longest/hardest part is the planning; once a plan is solid, the execution part is easy. I learned a lot, most hurdles that we have in our mind are simply that: hurdles that we have in our mind. As more often than not, we can be our own worst enemy, as our evolving character casts doubts in our minds of our abilities. Yes, there are forces in the world that work against us, makes it harder for some to achieve, but as Obama has proven, hard work and determination can overcome any obstacles … we just have to be ready to work hard and literally ‘grind’. That is what I have been doing, ‘grinding’; from planning a Live music show, working on databases, configuring operating systems, studying for school (even though they are strike, boo York University), handling the recession, looking for changes in employment, and dealing with personal relationships frustrations, it’s a shock that I am able to remain so sane. But, I do this, I live this ‘circus’ because I believe it drives me, it educates me, and prepares me for future scenarios; as I wrote in an earlier piece this year, I think I am developing a keen sense of acuity for a ClearView.

As we hit the end of month and step into December, I look forward to new challenges and obstacles – essentially stressors, but I think I am prepared to cope with the challenges ahead as I am refining myself to be more organized and focused. Now, I must trust myself to execute, and ‘pull the zip cord on the parachute’, with the hopes that I land in comfy green fields … Masdar City
The Green City in an Oil Rich Country

The project is headed by the Abu Dhabi Future Energy Company (ADFEC). Initiated in 2006, the project is projected to cost US$22 billion and take some eight years to build, with the first phase scheduled to be complete and habitable in 2009. The city will cover 6 square kilometres (2.3 sq mi) on a site 6.4 km² (2.5 sq mi) in size and will be home to 50,000 people and 1,500 businesses, primarily commercial and manufacturing facilities specialising in environmentally-friendly products, and an expected 40,000 workers will commute to the city daily. It will also be the location of a university, the Masdar Institute of Science and Technology (MIST), which will be assisted by the Massachusetts Institute of Technology (MIT). Automobiles will be banned within the city; travel will be accomplished via public mass transit and personal rapid transit systems, with existing road- and railways connecting to other locations outside the city.

Masdar City will be the latest of a small number of highly planned, specialized, research and technology-intensive municipalities that incorporate a living environment, similar to Novosibirsk, Russia or Tsukuba Science City, Japan.

Masdar will employ a variety of renewable power sources. Among the first construction projects will be a 40 to 60 megawatt solar power plant, built by the German firm Conergy, which will supply power for all other construction activity. This will later be followed by a larger facility, and additional photovoltaic modules will be placed on rooftops to provide supplemental solar energy totalling 130 megawatts. Wind farms will be established outside the city’s perimeter capable of producing up to 20 megawatts, and the city intends to utilise geothermal power as well. In addition, Masdar plans to host the world’s largest hydrogen power plant.

Water management has been planned in an environmentally-sound manner as well. A solar-powered desalination plant will be used to provide the city’s water needs, which is stated to be 60 percent lower than similarly sized communities. Approximately 80 percent of the water used will be recycled and waste water will be reused “as many times as possible,” with this so-called greywater being used for crop irrigation and other purposes.

The city will also attempt to reduce waste to zero. Biological waste will be used to create nutrient-rich soil and fertiliser, and some may also be utilised through waste incineration as an additional power source. Industrial waste, such as plastics and metals, will be recycled or repurposed for other uses.

Isn’t it messed that one of the world’s richest oil nations is taking this green initiative, while nations such as the United States have not even considered taking on such a project?