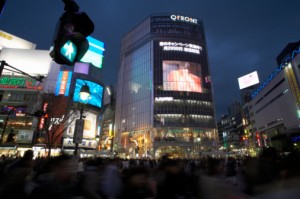 Ads are now watching You

Starting in January in Japan, an advertising firm will place an interesting piece of technology above an advertisement in a public place.   NTT Communications will use a system to track the effectiveness of ads; a representative said that the system will “… automatically measure the effectiveness of the advertisements we can put a camera and PC nearby, and by using the image from the camera we can estimate how many people are looking at the monitor.”  With facial recognition technology, the system can detect how many people are actually engaged with the advertisement; which is an interesting concept because up to now, advertising rates were based on estimated viewership/traffic in a certain area, this technology could easily change how advertising rates are structured because now, advertising agencies can actually measure the effectiveness of an ad, and can now give accurate number on how many people actually were engaged with a specific advertisement.  The privacy groups will cry foul saying that this is another example of ‘Big Brother’ watching over us, which they may have a valid point, but as long as the technology is only being used to detect faces, and not being transferred to government agencies for other uses, then I say that the technology should flourish as it gies a whole new dynamic to measuring effectiveness of advertisements.