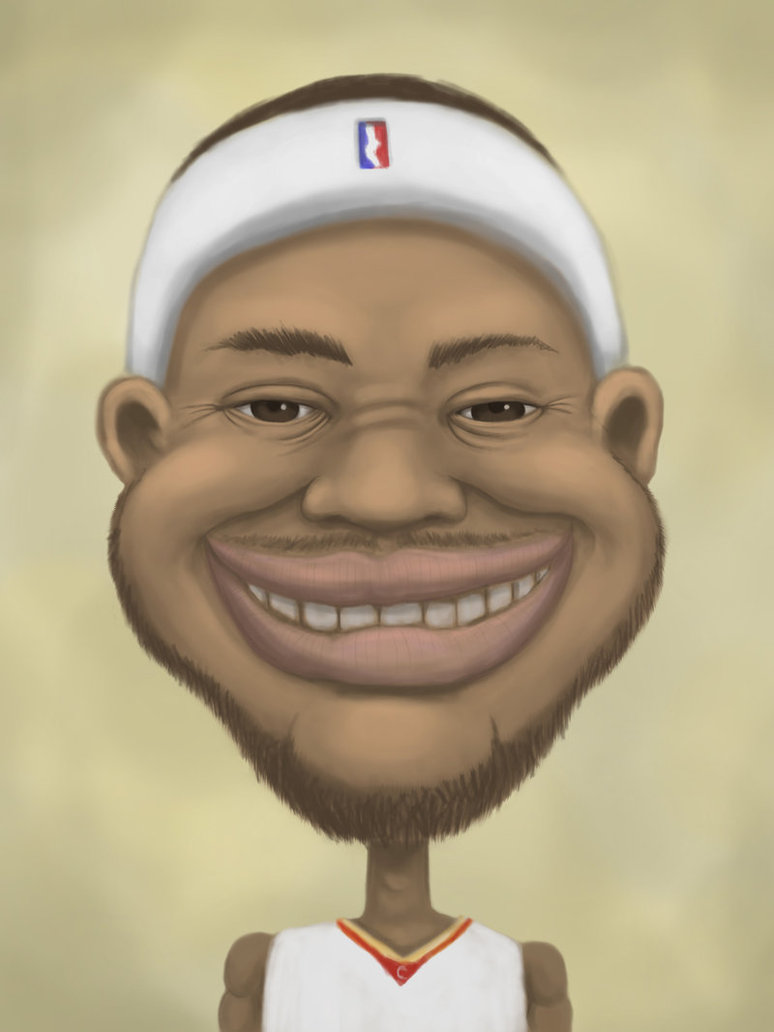 Its interesting how you can go from a fan favorite, to most hatred almost instantly; especially for the sports athlete elite whom are paid ridiculous amounts of money to shoot a cylindrical ball into hoop with mesh. LeBron James of the Miami Heat is a good case study of how fan art can change almost over-night from adoration to bitterness. And the transition begins ……

– This one is almost ‘coonish’
Via Jubhubmubfub

— I guess as an athlete you got to have thick skin … or piles of money to deal with all the ‘hate’. Image by The Jader

Analogies, comparing, knowing when to call it

2 is to 1 as one is to next inline to take over the ‘number one spot’; all of the analogies, with all things being equal in the universe, should over time, take over the number one spot from the current occupier in their respective field. So really it comes down to ‘how’ that change will happen; will it be a hostile takeover? Will the number one’s relevance diminish over time? Or will the number one bow out before they are still on top? When dealing with sports and entertainment; both are in the public eye, but the changes are very different – with sports figures usually going out on top to cement their legacy, and with entertainers they usually stay in the schoolyard too long; kinda like a College kid still hanging out around their High School – it just looks off.

So here are some examples of number 2’s hovering/vying for that number one spot:

Keri Hilson is to Beyonce

Lady Gaga is to Britney Spears

Lebron James is to Kobe Bryant

Soulja Boy is to Bow Wow Regardless if it is an R&B singer trying to overstep her boundaries, a manufactured pop tart trying to overtake an established pop tart, a great ball player challenging an olympic and multi NBA championship-winning player, or teeny rappers fighting over who gets the most adoration … eventually we all have to learn when to bow out and move on to another chapter in our lives.  Unfortunately with these examples, they probably will stick around High School well past until they are finished College, lol. Its sort of wicked what happened to Michal Vick, but he is a victim of his own ignorance.

Michael Vick was on top of the world, he was an all-star Quarterback with the NFL’s Atlanta Falcons, with the right team chemistry, Vick could have gone on to win several NFL championships as he is a unique quarterback that can throw, run, and get out of the ‘pocket’ (football term).

However, it is unfortunate that Vick felt the need to engage in Dog fights which resulted in a 23-month jail sentence conviction. As details emerged about Vick’s dog fighting events that happened in his estate, it became apparent that Vick would do some jail time for his crimes, but I never thought he would have gotten so much time – 2 years is a lot for dog fighting. Dog fighting is inhumane, violent, and barbaric – I get that, but in the case of Michael Vick, does the ‘punishment fit the crime’? Would someone without his status receive the same sentence? Probably not, and what is even more disturbing is that there have been sport celebrities that have committed more violent crimes against humanity that have received lesser & lenient sentences. For example, NHL hockey player Dany Heatley received 3 years probation for vehicular homicide after a drunk driving incident. In comparison, a drunk driving incident that results in death deserves 3 years probation (no jail time), but a victimless human crime results in 2 years in solitary confinement? Something doesn’t seem right about that.

Now, I’m not excusing Vick’s behavior because dog fighting is against the law, and he should be punished for his actions, but what is probably the most disturbing aspect of this story that is not receiving any light, is the fact that many sport athletes and celebrities foolishly spend their money and engage in activities that are problematic. I guess its the fact that many of these athlete’s come from marginalized backgrounds, and when they are doused with a whole bunch of money; they simply act-out irresponsibly. It happened to Mike Tyson, which is really sad, because he had millions of dollars, but spent his money on foolish items and lavish luxuries; with no regard for ‘saving for a rainy day’. And with Vick, he was making millions of dollars a year, and yet he felt the need to earn extra money with dog fighting; which was only pulling in thousands of dollars a year.

Its sad, because Vick had so much potential, but threw it all away because he simply didn’t ‘grow up’; which is the problem with most celebrities (i.e. Britney, and so on), and know the system is showing him that just as much as they can bring you up, they can bring you down.