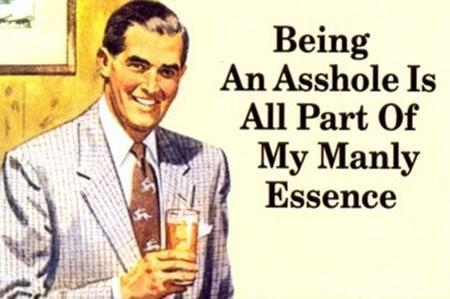 How we interpret events really depends on our perception; which is developed over time through experiences.  When we feel that we are ‘wronged’ or we are suffering some sort of injustice from our neighbors, ‘the man’, teachers, other authority figures – sometimes the only conclusion that we can arrive at to explain why people are treating us in a certain way can only be explained by ‘hatred’.  This ‘hatred’ though is ambiguous as it may be colored through ‘racist’ or ‘asshole’ goggles.  Ok, your probably not following, so let me paint this with examples:

The guy in this video is clearly an asshole, it is quite evident. Now, if you were the doctor, and you were black, some may interpret this as the guy not being an ‘asshole’ but a ‘racist’ – to explain why he is behaving so badly.  Essentially, you would have no choice to come to a conclusion such as that – this is why ‘context’ is so important and can lead to so many implications.

Thus many of the cries I hear from people in their attempt to describe authority figures like Cops, Teachers, bosses, etc. may be a mis-diagnosis — they are probably just assholes more so than racists.   To be an asshole usually suggests that one is not happy with themselves, and they take out their frustration on any and everything out there.   These people are rude, abrasive, and very self-centered – also mix in some condescending behavior and sarcasm, and you have an ambiguous person that can either be labelled a ‘racist’ or an ‘asshole’, depending on the context of the situation.

I guess if you find yourself dealing with an individual that you think may be an ‘asshole’ or a ‘racist’ … in the end it may not really matter how you label him; it just matters that you deal with the situation accordingly – if that means walking away or addressing it directly.  Just don’t let a false ‘labeling’ of such behavior fuel your anger to make you do/say something that you may regret – because then you may end up as an asshole yourself.

Check out the Asshole song by Denis Leary (90’s) here