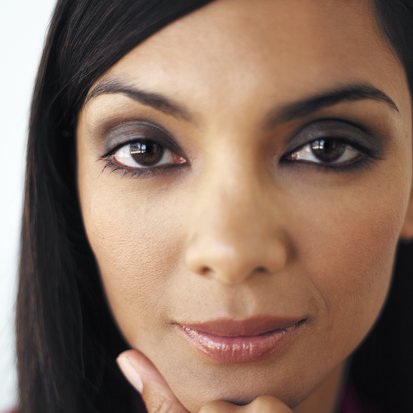 Naïve is a French loanword (adjective, form of naïf) indicating having or showing a lack of experience, understanding or sophistication. It can also be spelled naive. The noun form can be written naivety, naïvety, naïveté, naïvete, or naiveté.

Women can be one of two things; very naïve or very manipulative; I would go even further to suggest that sometimes they blur the line between manipulative behavior and naitivity; masking their manipulative states as being naïve. They do this so that when the sh*t hits the fan, they can deflect and redirect blame. Giving simplistic replies to their man like, “I didn’t know that he would do that”, “I am so shocked that he did that”, and “I had no idea that he was thinking like that” are sometimes humorous and disrespectful to our intellects. These examples are referring to those women whom always get into some sort of man trouble; either some guy gets aggressive with them, starts flirting with them, or starts stalking them – and then these women seem baffled as how this could have transpired. Of course you are going to have the odd creepy dirtbag, but I would suggest that a lot of the predicaments that women get into are a result of their direct chosen behavior.

So, if you are one of these lame’s, or know someone who is, here are some methods how you can change them:

Step 1: Confront their bullsh*t
– too often, we men are letting too much slide. Somewhere in the 70’s or 80’s or even 90’s, men were conditioned not to say what is on their minds, and to practice some sort of new age passive behavior where discussion about sensitive topics is taboo. Interesting correlation in the rise of feminism and the rise of pussification amongst men, lol. I’m digressing from the topic though, but you need to confront the issue when something doesn’t seem right, don’t let it go – cause it will probably happen again

Step 2: Common Sense is Common
– After the confrontation, they will try to retract, backtrack on statements, and will try to place the blame of the source of tension to situational factors – but never placing the blame on themselves. Screw that, no, screw that with a big Phillips Screwdriver. Women have a classic tendency in committing the Fundamental Attribution Error; attributing undesirable behavior/consequences to situational factors instead of dispositional factors (themselves). Part of the reason in doing this is simple; it is much easier to blame your problems on something else – and as a society, most of us may do it without much conscious awareness. But, that doesn’t make it right. Women need to own up to their behavior – that guy wouldn’t be making those sly innuendos if you hadn’t been flirting with him OR those guys wouldn’t be commenting on your appearance if you hadn’t been exposing so much cleavage. Get real ladies. Don’t come crying and complaining why certain things are happening to you when you know exactly why – stop playing the innocent game, ya guilty!

Step 3: Go at the stubbornness
– So if she still wants to play naïve, then there are some ways to get her to see the ‘light’ in her cloudy atmosphere. Essentially when one plays the naïve role, they are showing an undesirable trait; that trait is the lack of sophistication and critical judgment. So, point that out. Women always have a desire to be ‘sophisticated’ and an ‘expert authority’ on relationships and people – and by a certain age, at least near the end of high school, women have enough interactions to use as a reference point for the analysis and interpretation of future behavior … simply put, they have ‘experience’. That experience is learned by direct contact, and through TV., film, and the oral tradition (get ya mind out the gutter, wiki it). So when she acts shocked, surprised about why something has happened – and when you know the causal factors of why it happened, and she can’t accept that, then go at her intellect. She will hopefully see the error in her ways and stop her stubborn behavior.

Step 4: Acceptance
– Once you have said your peace, be at peace. Know that if they persist to act asinine and/or play foolish, undesirable results will materialize. Some women are completely naïve – and may have not learned from previous experiences; that is completely possible. However, I would suspect that most women know EXACTLY what they are doing and they use the naïve card as a ‘Get out of jail’ card. Sorry ladies, your card is expired, fellas stand up!

In summation ladies, you are very smart; much more than you lead on. You are very perceptive and aware of your environment and the people within it; simply take responsibility for your actions. And understand that most actions and behavior from others are intentional; and you as ladies have a good idea at the motivation behind it. Don’t play the fool, or you will end up the fool. Tired of y’all asking the obvious questions and standing there in bewilderment; kinda like standing with a mini-skirt, high heels, fishnet stockings, and low-cut tank top on the Las Vegas strip and asking why all these guys are asking if you are available for 30 minutes for a $100 … lol.