A lot of talk in the NBA this year has been about how to stop the ‘Hack-a-Jordan’ technique that certain teams employ on terrible Free Throw shooters; case in point DeAndre Jordan of the LA Clippers. DeAndre is a strong Offensive and Defensive presence, but he is one of the worst Free Throw shooters in the league – for the 2015-16 season he shot a staggering 43% during the regular season.   ‘Hack-a-Jordan’ is a strategic technique that is well within the NBA rules, but it slows down the game, is lackluster, and is a sad sight for sore eyes to watch Power Forwards/Centres try to make free throws. The whole ‘Hack-a-Jordan’ is spawned from the ‘Hack-a-Shaq’ technique when teams used to intentionally foul future Hall of Famer Shaquille O’Neal (usually in the 4th quarter and when the game was close), Shaq was a horrible free throw shooter, but a dominant scorer. 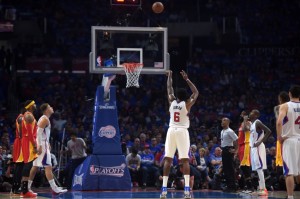 Fast forward to the current Era, and the ‘Hack-a-Jordan’ has altered courses of games and is different than the ‘Hack-a-Shaq’ because we are seeing the technique used all throughout the game — not just the 4th Quarter. The Basketball journalists and armchair experts have loudly chimed for a rule change; and I am sure Commissioner Adam Silver is working on one. But I have an idea that can radically change the game – and it involves borrowing a concept from Hockey and Soccer: introducing disadvantaged scenarios.

In Hockey, when there is a penalty committed, the penalty offender is relegated to the penalty box for 2 mins, while his team is down a player; causing a 5-on-4 situation. This concept can be applied to Basketball. Imagine what 5-on-4 basketball would do to open up a game? I propose in situations where there are intentional off-the ball fouls, flagrant fouls, and technical fouls, part of the punishment should include that the offending player is removed from the court for a predefined set of time. Now, if we borrow from the Hockey rulebook, the player would be off the court for 2 mins – resulting in a 5-on-4 situation. And the player would only be allowed to enter back in the game after the 2 mins, but can only enter after a stoppage in play (ball goes out of bounds, foul, etc). Allowing for 5-on-4 situations would deter teams from employing ‘Hack-a-Jordan’ and would force players to think twice about committing a technical or flagrant foul.

Now, I know in Hockey, the power play is stopped after the the advantaged team scores a goal, but this wouldn’t work in Basketball as it is a high scoring game; and you would still have disadvantaged teams scoring as they could jack up 3’s. Basketball has changed from a post-up game to a more nimble run-and-gun game that has opened the court up and put a focus on smaller line-up that can shoot 3’s. But imagine how the game could open up with less players on the court? The defensive and offensive strategies that would have to be employed to play 5-on-4 would bring a new dynamic and excitement to the game — and most importantly it would stop this scourge of ‘Hack-a-Jordan’ so that we don’t have to witness terrible free-throw shooters.