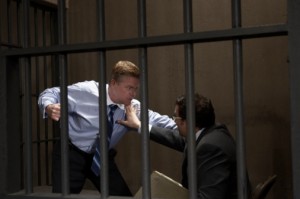 A passenger on the ‘Miracle on the Hudson’ sues

The miracle on the Hudson, where the pilot miraculously landed a plane on the cold water in New York City.  Most times when you hear of an aviation accident, it usually results in passengers and crew members perishing.  However, the decades of aviation training and safety experience, resulted in everyone on the flight being saved – no casualties.  Everyone on the flight should be grateful that they are allowed to breath another day – and even the airline, which are only liable up to $3300 dollars for each passenger in the event of death or loss luggage, made the good faith gesture of giving each passenger $5000.  However, one passenger wants to file a lawsuit against the airline, as he claims that he is not ‘whole’ – as if still having a life isn’t reward enough.  This Douche bag wants to exercise America’s long propensity of litigious behavior – suing for every and anything.  But this guy has to be the Douche of the year –  as he should be thankful that he even has life to cast such a frivolous suit.

But Karma will hopefully get him, appropriately.

2 thoughts on “The Litigious Era”